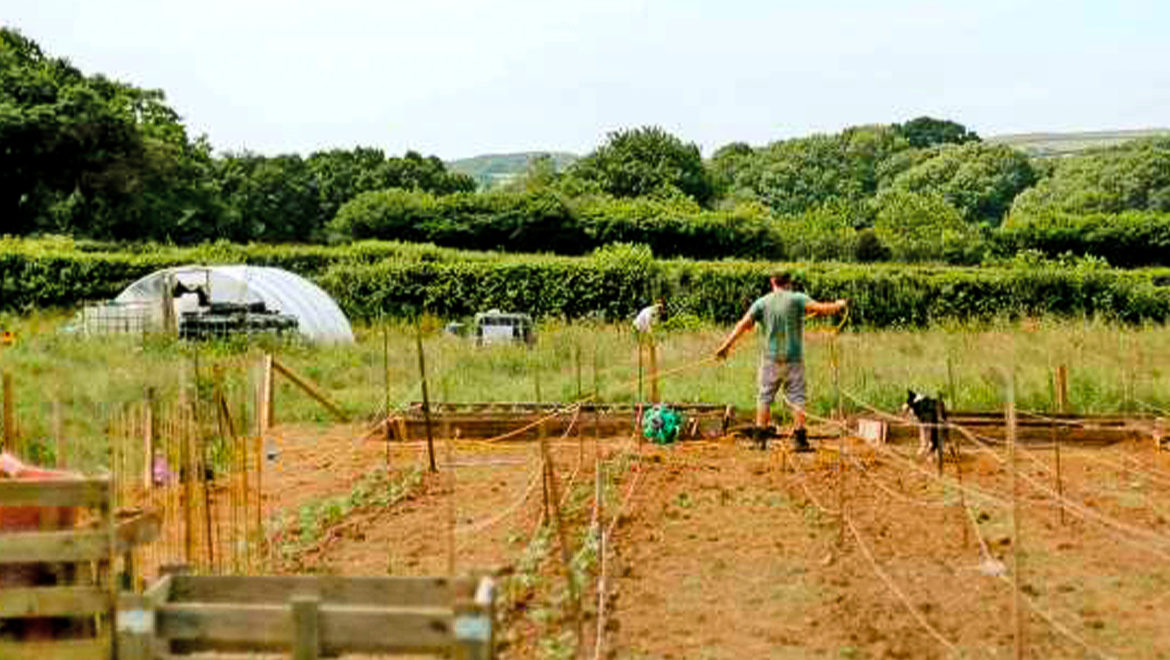 Stephen Keighley, one of Tamar Grow Local’s farm-start tenants at Mill Lane Acres in Metherell will be starring in the new series Devon and Cornwall produced by True North TV and being shown on More 4 this month.

Stephen caught the eye of the production company as he was new to market gardening, a big lifestyle change from a previous career in Estate Agency in London. He joins 3 other tenants at Mill Lane Acres who are all establishing their own growing businesses including a vineyard, orchard and another market garden.

Stephen who is from Launceston started up ‘Brockley Farm’ his half-acre plot in in Metherell in 2018. In his first summer at Mill Lane, Stephen harvested a wide variety of fresh vegetables and salads which were sold at a market stall in Launceston and also at Tamar Valley Food Hubs. After his first summer Stephen was looking to expand his acreage in the valley site and the range of naturally grown produce to sell locally.

Stephen said of his first year at Mill Lane Acres: “Year 1 was a real eye opener but a hugely enjoyable one following a lifelong dream. Having started with a bare field the work involved in creating new beds, adding nutrition, sowing, planting, weeding, harvesting and packing, was far more than I had ever expected. Keeping the pests and weeds at bay was also a daily challenge. And what a summer to start the business in – the longest drought for many a year. I’ve never wanted rain so badly in my life! But I’ve thoroughly enjoyed every long day there & learnt so much about working with nature which will stand me in good stead for the season ahead.”

And of starring in the new series Devon and Cornwall, “I was totally shocked to get a call to say they wanted to film me at work through the summer. Although I’m personally very proud of my achievements, I never expected a television production company to be interested in my story. The filming took place between June & October and was thoroughly enjoyable.  Everyone at True North was an absolute pleasure to work with & we all had a laugh filming.”

Kick-starting a vegetable growing business can have a number of obstacles including access to land and routes to market. Tamar Grow Local are helping to encourage people into market gardening with low cost land, easy in / out tenancies and help with sales of produce and distribution through Tamar Valley Food Hubs, an online farmers market which is not-for-profit to ensure that producers get fair prices for everything they sell through the site.

Simon Platten from Tamar Grow Local said: “Access to small parcels of land can be very difficult, especially for those from non-farming families or for those who do not have the resources to lease larger areas of land on a long-term basis. Our farm-start plots are a great way to move from recreational growing into experimenting with larger scale and commercial production with help, support and routes to market along the way.”

Andrew Sheldon, Executive Producer for the Devon and Cornwall series said: “Stephen and Tamar Grow Local introduced us to a profession the area is historically famous for, being approached in a thoughtful and modern way. The whole team were struck by the amazing weather in the South West generally, but in Stephen’s case this also added a little drama for us as last year’s heat wave threatened to bake his market garden. Stephen’s story is a perfect demonstration of how rewarding, but also how precarious it can be making a living off the land. Stephen and Tamar Grow Local – like so many we met over a long summer’s filming – welcomed us in and taught us much about the West Country way of life”.

Devon and Cornwall is on Monday nights on More 4 at 9pm with Stephen’s episode being broadcast on Monday 29th April. Brockley Farm produce will be available over the summer at www.tamarvalleyfoodhubs.org.uk and further farm start plots are available at Mill Lane Acres. For further information visit www.tamargrowlocal.org

Any cookies that may not be particularly necessary for the website to function and is used specifically to collect user personal data via analytics, ads, other embedded contents are termed as non-necessary cookies. It is mandatory to procure user consent prior to running these cookies on your website.